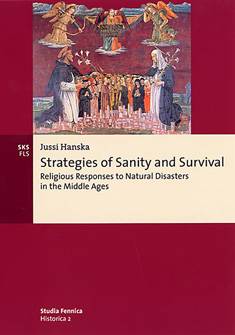 Natural disasters have long been a neglected subject in the study of history. At most they have been casually mentioned as a background material for political or social history. During the 90s this state of affairs has slowly began to change. Nevertheless, there is still no general history of natural disasters available in any language.

This book aims to cover one grey area in historical studies, that is, spiritual responses and survival strategies of medieval man in front of natural disasters. It asks what were his means to deal with natural disasters, phenomena he could not scientifically understand. How did he try to prevent them? What were his feelings and actions when the situation was on? How did he manage to carry on with his life afterwards?

It is an unusual book in many respects. It is a specific study based on original and in most cases unedited sources, but it can also be read as a general introduction. It crosses boundaries between different fields of learning and traditionally accepted time periods of history. Even if it is essentially a book on medieval man, it stretches far beyond the middle ages as conventionally understood. The final chapter traces the slow disappearance of the medieval mentality until the early nineteenth century.